For those who dismiss aid to Ukraine as pivotal to our security, at home and abroad, perhaps 9/11 will resonate. Here’s the backstory to the backstory of our July 31 drone strike that killed Ayman al-Zawahiri, head of al Qaeda, and the apparent connection.

In the 1970s, Ion Pacepa, head of Romanian foreign intelligence, visited General Alexander Sakharovsky, head of the KGB’s First Chief Directorate (foreign operations). “Terrorism has to become our main weapon,” he reportedly told Pacepa. Pointing to a world map bristling with red pins, each representing a hijacked airplane, Sakharosvky continued: “Airplane hijacking is my own invention.”

In 1987, GRU (the military counterpart of the KGB) defector Vladimir Rezun (aka, Viktor Suvorov), laid out a scenario: two successive plane crashes into the White House, the second one timed to obliterate the first responders and command structure who arrived the scene after the first crash.

In 1997, having spent six months in Russia, al-Zawahiri decamped to Afghanistan, becoming Osama bin Laden’s lieutenant and mastermind of 9/11. There promptly followed the 1998 U.S. embassy bombings in Africa, the 2000 bombing of the USS Cole, the 2005 London bombings, and more.

Alexander Litvinenko was the defecting FSB officer in London who Vladimir Putin incinerated from the inside out with Polonium 210, nuclear terrorism in the Magna Carta’s backyard. A year before his 2006 assassination, and then again on his hospital deathbed, Litvinenko revealed that while in Russia-controlled Dagestan in the Caucasus, al-Zawahiri had undergone training by the FSB, Russia’s Federal Security Service and successor to the KGB. Dagestan was also the springboard for the subsequent two Boston Marathon bombers.

The Russia connection was raised earlier by others, and Litvinenko’s disclosures are consistent with other information. Konstantin Preobrazhensky, a former lieutenant colonel in the KGB, confirmed and also wrote about the connection, via an Iraqi intelligence agent, between Mohammed Atta, the pilot of the first plane to crash into the World Trade Center, and Russian intelligence.

We also know that former KGB head Yurij Andropov, Putin’s pedagogue, reportedly saw the Islamic world “as a petri dish in which Moscow could nurture a virulent strain of America-hatred.” Moscow encouraged Arab nationalism in the 1970s and 1980s as the genome for Islamic terrorism, and helped train, finance, arm and direct the terrorist assault against us and our allies. Generic terrorism evidently was fine, too. Remember Paris, Athens, Vienna, London, West Berlin? The bomb attack in Brussels on Gen. Alexander Haig, commander of NATO? The murders of U.S. Ambassador Cleo Noel and his deputy, George Moore, in Sudan? The assassination of U.S. Ambassador J. “Chris” Stevens in Libya?

The German Stasi reportedly was a key player in Moscow’s terror network. There are plenty of reasons to conclude that in Dresden, Putin had a connection to the terror networks established by his mentors. Promptly after President Bush declared Iraq, Iran and North Korea the “axis of evil,” Putin reinstituted weapons sales and nuclear assistance to Iran. Iraq received a $40 billion trade deal. And North Korea’s despot, Kim Jung Il, was celebrated in Moscow. In 2003, Putin declared at a meeting of the Organisation of the Islamic Conference (OIC) that Russia was Islam’s historical defender, and Russia received associate status. The USSR was the first state to recognize Saudi Arabia in 1926 and initiated the World Muslim Congress in Mecca, the prototype of the OIC. And Russian operatives, in an apparent false flag operation, posed as ISIS and threatened to kill U.S. military families.

No surprise here. The rejection, subversion and destruction of Western values and its social fabric overlaps Russian fundamentalism with radical Islamic fundamentalism. Both market a vitriolic anti-Western, anti-American ideology, a faux morality playing the “America is immoral” card. Both are propelled to kill, to savage, to destroy. For both, it’s more than a duty; it’s an entitlement.

Demonstrative affirmation of anniversary dates is a KGB passion. Putin critic Anna Politkovskaya was murdered on his birthday. And 9/11 saw Putin’s celebration of the birthday of the notorious Felix Dzerzhinsky, founder of the Cheka, precursor to the KGB/FSB. Dzerzhisnky had enthused: “We stand for organized terror — this should be frankly admitted. Terror is an absolute necessity.” The smoke hadn’t cleared before Putin was on the line to the American president with his professed condolences. Ditto after the Boston Marathon bombing.

Where are we today? 1997 also saw the appearance of Russia’s blueprint calling for, among other measures, an Islamic/Russian alliance against America. It specifically highlighted a  Russian/Iranian joint venture. The destruction of Ukraine was pivotal.

Fifty-one NATO and allied nations, including Ukraine, aided the U.S. in Afghanistan. After Russia’s invasion of Ukraine on Feb. 24, 2022, 141 nations signed the UN resolution condemning Russia. But for more than eight years, since the 2014 Russian invasion, Ukraine was alone in battling against the terrorist state that launched Islamic terrorism against the West. To add to the irony, for a generation Ukraine has contributed “boots on the ground” to our war on terror and peacekeeping missions. During our shambolic exit at Kabul airport last August, it was the Ukrainians who, in a special ops, rescued refugees the U.S. or NATO would not or could not rescue.

Our post-9/11 war on terror cost $8 trillion and 22,000 casualties. Our aid to Ukraine, so far, is less than 1 percent of that, with no American casualties. Ukraine’s losses are staggering. One estimate placed Ukraine’s losses, in 2 ½ months, equal to America’s losses in Iraq and Afghanistan in over 20 years.

Now, following renewed shelling of Ukraine’s Zaporizhzhia nuclear power plant, Europe’s largest, Ukraine’s Energoatom nuclear agency reports the threat by Major General Valery Vasiliev. He’s in charge of Russia’s radiation, chemical and biological troops and has occupied the plant. “There will be either Russian land or a scorched desert. … As you know, we mined all the important objects of the Zaporizhzhia nuclear plant. And we do not hide this from the enemy. We warned them. The enemy knows that the plant will be either Russian or nobody’s. We are ready for the consequences of this step. And you, liberating soldiers, must understand that we have no other. And if there is the toughest order — we must fulfill it with honor!”

The global catastrophe would make Chornobyl a petty event. Let that sink in.

We remain bulletproof against reality. Russia is not simply a state sponsor of terrorism. It was and remains the quintessential terrorist state. After eight years, we’re still rolling out sanctions? We must match Ukraine’s will and share its purpose. Strategic aphasia won’t cut it.

Victor Rud has practiced international law in New York and New Jersey for 35 years. He is the past chairman of the Ukrainian American Bar Association and now chairs its Committee on Foreign Affairs. He is a senior adviser to Open Ukraine, a nongovernmental organization in Ukraine, and the senior adviser to the Centre for Eastern European Democracy in Toronto. 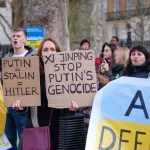