NATO’s soon-to-be 32 countries comprise three nuclear powers, half the world’s economy and a billion people. Then add the rest of the West: 43 countries if we count participants in the Ramstein meeting on April 26. Nations sanctioning Russia account for 64.9 percent of global economic production. Solitary Russia has less than half the population of the U.S., and its economy equals the market capitalization of a single America company — Apple Computer. NATO’s annual defense spend is $1.2 trillion; Russia’s is $66 billion.

Despite the stunning imbalance, for a generation we have failed to deter and then to stop Russia’s international predation. We dare not now push Ukraine into a “settlement agreement” with Russia.

The very assertion is heretical. Domestically, we’re hypnotized by “doing the deal,” viewing any agreement as the actual resolution of a problem. We approach international relations similarly, idolizing international agreements as we do domestic ones: as solutions to problems, not as their cause; as resolutions of conflict, not as their catalyst; as paths forward, not highways for reversal.

“Managing” relations for “stability and predictability” is our mercantile DNA. It was, in haec verba, our mantra at last year’s Geneva Summit. How did that work out?

Kalashnikov is to Russia as Tide Pods are to America. Russia’s imperial DNA is implacably aggressive, demands instability, and sneers at compromise. Agreements exist to stymie their purpose, to secure the opposite, or to secure time and advantage for the next assault. Our predicates of restraint, reason and negotiation toward compromise are anathema. A “diplomatic solution” in Ukraine would be a group hug around a delusion, the only predictability being its breach.

Cataloging solemn agreements garroted by Moscow would exceed the word count of this piece.  Three examples suffice. In 1933, to secure Washington’s recognition as Moscow was starving Ukraine, Moscow agreed“to refrain from … any act overt or covert liable in any way whatsoever to injure the tranquility, prosperity, order or security of the whole or any part of the United States, in particular any agitation or propaganda.” Need morebe said?

In the 1990s, we hectored Ukraine into surrendering to Russia, of all places, the world’s third largest nuclear arsenal, larger than that of China, France and England combined, at the time. This was not, as with Iran, a matter of prospective nuclear capability but the implosion of an existing, massive nuclear industry. It included the largest intercontinental ballistic missile plant in the USSR that produced the missiles Moscow had installed in Cuba. Russia promised to make nice. Years later, Vladimir Putin laughed in a New York Times opinion piece: “[I]f you cannot count on international law, then you must find other ways to ensure your security. Thus, a growing number of countries seek to acquire weapons of mass destruction. This is logical: If you have the bomb, no one will touch you.”

On Monday, Russia allowed a ship carrying grain to leave Odessa after a UN-backed agreement. But a day before, Russia killed Oleksiy Vadaturskiy, Ukraine’s leading agricultural entrepreneur, and his wife with a missile attack on their home. To believe that Russia will suffer a makeover and comply with any “settlement” is self-anesthetizing naiveté.

And what is to be negotiated? Ukraine is less than 3 percent the size of Russia. Russia is the largest country on earth and doesn’t need more territory, except as necessary for the erasure of Ukrainian nationhood. Russia’s is an openly genocidal war against Ukraine, with the Russian Orthodox Church (no less ) issuing wallet cards to military personnel, stating: “Your task is to wipe the Ukrainian nation off the face of the earth.” What do you compromise, how do you “settle” with a war criminal intent on your obliteration?

It’s not just an existential matter for Ukraine, where a negotiated settlement ceding any territory would condemn millions of souls to horror. Destruction of Ukraine is part of Russia’s total warfare doctrine against us, Russia loudly emphasizing, “We are at war with the West.” And, “[T]his operation means the beginning of a radical breakdown of the U.S.-style world order.”

For generations we’ve intoned the catechism of the rules-based international order but ignobly surrendered, endorsing the Minsk agreements after Russia’s initial invasion in 2014. They sought to impose upon the victim, Ukraine, the very limitations on its sovereignty and other penalties that international law imposes on the aggressor, Russia. We capitulated to Putin’s reality reversal. Redemption is paramount.

We should wonder if China’s Xi Jinping raised Minsk during last week’s two-hour phone call with President Biden. Taiwan is not a member of the United Nations, and other than a few microstates such as Nauru, Palau and Tuvalu, no nation recognizes Taiwan’s sovereignty or territorial integrity. America withdrew diplomatic recognition from Taiwan in 1979.

Ukraine is the opposite, is a founding member of the UN and recognized internationally. It is a state with a meaning and consequence that Taiwan is not. If we push for compromise of Ukraine’s sovereignty or territorial integrity, then where is our deterrent credibility regarding Taiwan, which the rules-based international order does not recognize? It would torpedo our deterrence credibility with China and other tyrannies. Little wonder that Putin’s sycophant, Dmitry Peskov, goose-stepped solidarity with Xi.

And from where, how would we enforce any “diplomatic solution”? Domestic agreements work because enforcement institutions exist to forestall or remedy breaches. Since there is no effective third-party enforcement mechanism for international agreements of the greatest moment — those bearing on national sovereignty — global pressure on the aggressor is the only default. We and our allies are now engaged precisely in such “enforcement” of myriad past agreements (think UN Charter, Helsinki Accords, etc.). Seeking yet another agreement would be hypocritical abdication.

Finally, any “negotiated peace” means accountability for the crime of aggression, genocide, war crimes and atrocities would be off the table. Russia’s international predation will increase, energy and food will become weapons of mass destruction, and domestic terror, economic and political turmoil in the West will explode. And the sluice gates will be opened for Beijing, Pyongyang and Teheran.

Agreements don’t end wars. They document on the ground reality ending that war. That reality will be determined either by (a) NATO’s “unwavering support for Ukraine’s territorial integrity within its internationally recognized borders,” or (b) capitulation to Russia’s “The Ukraine that you and I had known, within the borders that used to be, no longer exists, and will never exist again.”

Pressuring Ukraine for a settlement agreement would condemn to the death pits of Bucha and Mariupol the international order born of World War II horrors. Remember that “conflict”? It would make China’s certitude and contemptuous threat against America’s Speaker of the House visiting Taiwan but a prequel to the next one.

Victor Rud has practiced international law in New York and New Jersey for 35 years. He is the past chairman of the Ukrainian American Bar Associationand now chairs its Committee on Foreign Affairs. He is a senior adviser to Open Ukraine, a nongovernmental organization in Ukraine, and the senior adviser to the Centre for Eastern European Democracy in Toronto. 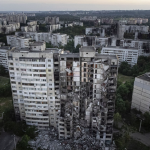 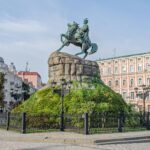 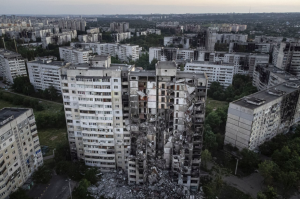