A student in Odesa, Ukraine, responds to her teacher in Ukrainian. She is told to stand up in front of her classmates and is berated for daring to speak the language. In the distressing audio recording, you can hear the young girl break down in tears.

This incident occurred in October of 2020. The teacher, Rayisa Pirohova, has since been fired – but the consequences of her actions will have a distasteful, lasting impact on the young student who simply spoke the country’s official language.

Rovira (2008) explains that language is central to cultural identity. It is through language that traditions, values, and other cultural aspects are both expressed and intergenerationally transmitted (Rovira, 2008). Moreover, language shapes our interpretations and experiences (Rovira, 2008). Losing a language – when someone immigrates or because it is suppressed, for example – is dangerous. It is not just a loss of speaking ability, but rather a loss of one’s roots, hopes, and wisdom. The strong association between language and identity applies on both individual and collective levels. For Ukraine, the Ukrainian language is central to its national identity.

Suppression of the Ukrainian Language

It seems clear, then, that an effective way to interfere with the sovereignty of a country is to suppress the language its people speak, thus adversely affecting both individual and collective identities. This is why, in Ukraine’s centuries-long history of being oppressed on all fronts, Ukrainian language erasure is one of the most dominant narratives.

In the 17th century, many important Ukrainian gospels and works of Ukrainian theologians were burned. In the 18th century, Ukrainian schools in Ukraine were closed and decrees were re-written in Russian. In the 19th century, Ukrainian-language schools were banned, Ukrainian stage performances and lyrics in folk songs were prohibited, and the delivery of church services in Ukrainian was forbidden. In the 20th century, the Ukrainian press was banned and Ukrainian schools in other countries with Ukrainian minority groups were closed. Russification campaigns were widespread. To this day, the Ukrainian language is still being suppressed, namely in Russian-occupied Crimea, Luhansk, and Donetsk. These are just a few examples of attempts to eliminate Ukraine’s sovereignty through language suppression.

Your Language Use Can Reinforce a Sovereign and Democratic Ukraine

In recent years, Ukraine has begun reclaiming its language sovereignty – and this is how you can do your part:

Do this within the diaspora, and do this especially within Ukraine itself.

If you do not speak Ukrainian, your language use can still reinforce a sovereign Ukraine. In 1995, four years after the collapse of the Soviet Union, the Government of Ukraine approved the transliterated spelling of its capital city – Kyiv. In 2018, Ukraine’s Ministry of Foreign Affairs launched the #KyivNotKiev campaign with the intention of supporting Ukraine’s sovereignty over the spelling of its own capital city and pushing international organizations to move away from the linguistic relics of the Soviet Union. The Ministry of Foreign Affairs has since expanded the campaign to cover the names of other geographic areas in Ukraine that are still being referred to by their Soviet-era spelling, under the hashtag #CorrectUA. One of the most widespread mistakes included on this list is referring to Ukraine as “the Ukraine.” Adding the definite article in front of the country’s name implies that it is a region rather than a state – it should not be done. Implementing small changes such as these to your everyday language use is important and impactful as Ukraine faces ongoing Russian imperialism and aggression.

If a nation is not sovereign, it is unable to apply the voices of the people towards policy. By following these language tips, you will be contributing to the freedom, sovereignty, and democracy of Ukraine. If not for the Eastern European country itself, then for the young girl who just wanted to speak her native language. 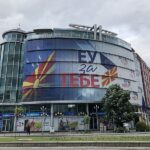 Anhelina Ostapyk is currently pursuing her Honours Bachelor of Social Sciences in Anthropology at the University of Ottawa. She is passionate about publicly-engaged anthropology and interested in the evolving fields of memory studies and politics of memory. At present, she is an Editorial Board Member of the blog created by the Centre for Eastern European Democracy (CEED).